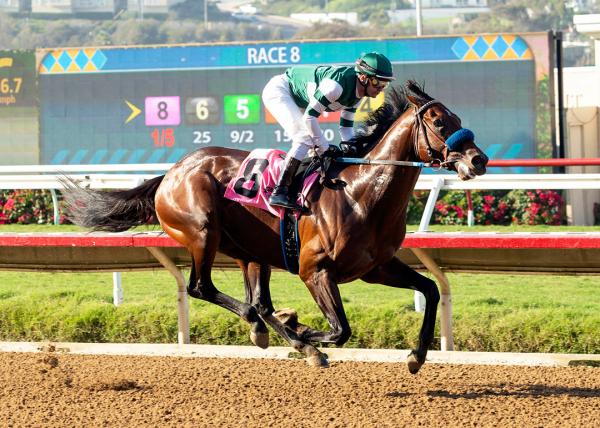 Benoit PhotoFlightline, shown winning an allowance at Del Mar in September, completed a five-furlong work in 1:00.20 at Santa Anita on Sunday.

ARCADIA, Calif. – The fast but untested Flightline tuned up for the biggest race of his budding career with a five-furlong work in 1:00.20 on Sunday morning at Santa Anita, one week before his scheduled start here in the $300,000 Runhappy Malibu Stakes.

The seven-furlong Malibu is one of six stakes on the opening-day card, and one of three Grade 1 stakes. In advance of that, a number of horses scheduled to run opening day recorded works on Sunday, including such accomplished runners as Hot Rod Charlie and Hit the Road.

Flightline, 2 for 2 for John Sadler, is scheduled to face Dr. Schivel, who was a narrow loser of the Breeders’ Cup Sprint in his last start and is a major candidate for the Eclipse Award as champion male sprinter. Entries for the Malibu, and the rest of the opening-day card, were scheduled for Monday.

:: Bet the races with confidence on DRF Bets. You're one click away from the only top-rated betting platform fully integrated with exclusive data, analytics, and expert picks.

Her rivals in the seven-furlong La Brea are expected to include Missy P, who worked seven furlongs in 1:25 for trainer Richard Mandella for her first start since June.

“I wish I’d have had an allowance race to prep her in, but we’re gonna act like she won one and give it a go,” Mandella said.

Private Mission, cutting back from the Breeders’ Cup Distaff, also is set for the La Brea after working five furlongs in 58.60 seconds on Sunday morning for Bob Baffert. The drill was the fastest of 96 at the distance.

Hot Rod Charlie worked seven furlongs in 1:27.40 for trainer Doug O’Neill while disposing of his company in the final furlong as he readied for the Grade 2, $200,000 San Antonio Stakes, a 1 1/16-mile race in which he will again face older runners. He most recently was fourth in the Breeders’ Cup Classic.

His rivals are expected to include Azul Coast and Eight Rings, both of whom worked five furlongs on Sunday morning for Baffert, with Azul Coast timed in 59.40 seconds, Eight Rings in 59 flat.  They were first and third, respectively, in the Grade 3 Native Diver at Del Mar last month.

Going Global, expected to head the field in the Grade 1, $300,000 American Oaks for 3-year-old turf fillies at 1 1/4 miles, worked five furlongs on the training track in 1:00.80 for trainer Phil D’Amato. Unlike at Del Mar, turf works are not permitted at Santa Anita, so many grass horses often are worked on the training track to approximate the tighter turns of the turf course.

Another worker of note was Mackinnon, who crossed the wire third in the Breeders’ Cup Juvenile Turf last time out. He worked five furlongs on the training track in 59.40 seconds for O’Neill.