Get Access to BONUS card for FREE with any same-date race card purchased below.

Early Oaklawn opener one of many surprises at meet 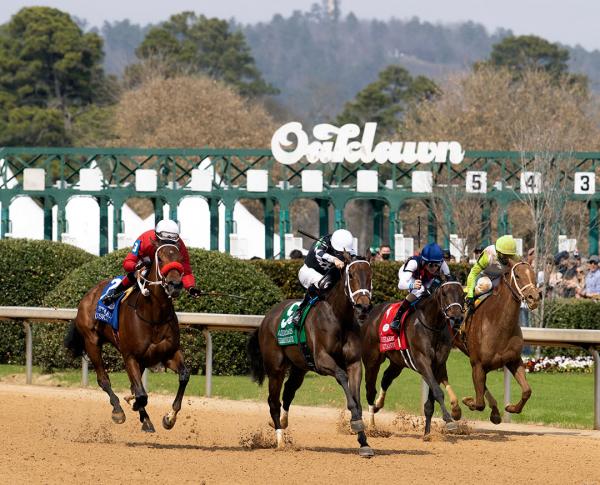 Barbara D. LivingstonThe 66-day Oaklawn Park meet will run through May 8. Purses are expected to average $700,000 per card.

Oaklawn Park will have its earliest opening in the track’s 118-year-old history on Friday, when it launches an expanded 66-date meet. The season will run through May 8.

For the more than five-month stand, Oaklawn is mostly racing Friday through Sunday with the idea of making every weekend feel like, well, Christmas.

“The Triple Crown events, the Breeders’ Cup – those are the best events in racing,” Oaklawn president Lou Cella said. “They’re just for one weekend. There’s a lot of hoopla and excitement, but it’s for one weekend.

“What we’re trying to strive for at Oaklawn is to bring that level of excitement – we’ll never get to a Kentucky Derby or Breeders’ Cup – for every single weekend that we race. Really, for the folks who can’t afford, or don’t have the ability, to go to those great, super-events, we want to put on a show that’s special, and special to racing.”

The schedule shift comes on the heels of the opening of a trackside hotel, spa, and events center to complement a robust casino and sports-betting operation, and an established racing program.

:: Bet the races with confidence on DRF Bets. You're one click away from the only top-rated betting platform fully integrated with exclusive data, analytics, and expert picks.

With those pillars in place, the Oaklawn experience has been upgraded across the board, from the placement of its Triple Crown preps, to reimagined eating establishments, to a redesigned infield with fountains that burst with color some 35 feet into the air.

The infield – which has three new concession buildings – could open as early as February, Cella said.

“We feel that this formula of bringing a really nice hotel, food and beverage, great racing, super-high purses, and entertainment all into one package is the new way of racing to succeed,” he said.

Anticipation for the new season is palpable.

Cella said the hotel is booked for the month of December, with the track keeping a few rooms in its “hip pocket” for connections coming in for stakes events. The record $12.3 million stakes schedule consists of 36 races, none richer than the $1.25 million Arkansas Derby on April 2.

The 1 1/8-mile race, previously worth $1 million, has been repositioned five weeks ahead of the Kentucky Derby in a move that changes the complexion of the Triple Crown trail. The dates switch also results in a domino effect on Oaklawn’s 3-year-old program as the track’s other Kentucky Derby points races have all been moved up on the calendar. The Smarty Jones – boosted to $250,000 in value from $150,000 – will be held Jan. 1. The Grade 3, $750,000 Southwest is Jan. 29, and the Grade 2, $1 million Rebel is Feb. 26.

“In our humble opinion, the Arkansas Derby has been the premier event leading to the Triple Crown,” Oaklawn racing secretary Pat Pope said. “Trainers wanted a little more time, so we’re going five weeks out, which is a major change from the traditional three weeks out.

Pope said more than 100 individual trainers have been granted stalls. The ranks include Hall of Fame trainer Steve Asmussen, who is shooting for a record-breaking 12th title at Oaklawn.

“Of those 100-plus trainers, right around 40 percent have chosen the Arkansas-Kentucky circuit,” Pope said.

:: Get Daily Racing Form Past Performances – the exclusive home of Beyer Speed Figures.

As for the stakes schedule, it reaches fever pitch in April.

“April has turned into the Racing Festival of the South,” Pope said. “It’s no longer a week. It’s no longer two weeks. It’s celebrated the whole month. We’re trying to bring in some of the best Thoroughbreds in the country for patrons to come and watch.”

Aside from the Arkansas Derby and $600,000 Fantasy, other major races during the month include a pair of $1 million stakes on April 23 – the Grade 1 Apple Blossom Handicap and Grade 2 Oaklawn Handicap. The Grade 3, $500,000 Count Fleet Sprint Handicap will be showcased on its own card April 16.

First post has been moved up to 12:30 p.m. Central daily, with the exception of certain dates, Pope said. There is a special Monday card Feb. 21, while there will be no racing Dec. 24-26 in observance of Christmas and on April 17 in observance of Easter.

Cella, who represents the fourth generation of his family to helm Oaklawn, will be closely monitoring the reception to the track’s new approach.

“So, we’ll see if racing fans embrace it. We’ll find out.”

If it’s a hit, Oaklawn could regularly ring in the Christmas season.