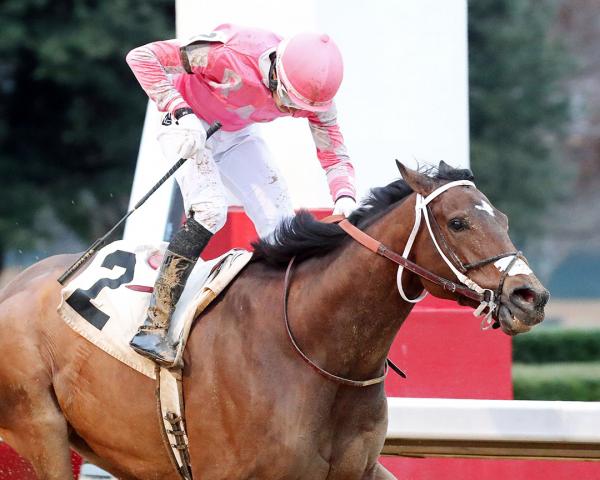 Coady PhotographyLone Rock ran down his stablemate Thomas Shelby to win the Tinsel Stakes while shortening up to 1 1/8 miles. He will try 1 1/16 miles in the Razorback.

Lone Rock will launch his 7-year-old campaign next month at Oaklawn Park.

Trainer Robertino Diodoro said Tuesday that the millionaire is headed for the Grade 3, $600,000 Razorback Handicap on Feb. 12.

“We’d been talking over a few different options and think that’s the best one right now,” said Diodoro, who trains Lone Rock for Flying P Stable and R.A. Hill Stable.

Lone Rock won 7 of 9 races last year, including a pair of Grade 2 events at marathon distances. He shortened up to 1 1/8 miles for his last start, the $200,000 Tinsel on Dec. 18 at Oaklawn, and won by three-quarters of a length over stablemate Thomas Shelby.

The Razorback will be run over 1 1/16 miles. Lone Rock is a winner at the distance at Oaklawn. For his win in the Tinsel, the horse earned a Beyer Speed Figure of 98.

“I thought he showed a lot of grit,” Diodoro said. “Being trapped down inside, shortening up in distance, he still came running and got the job done.”

:: DRF Bets players get free Daily Racing Form Past Performances and up to 5% weekly cashback. Click to learn more.

Thomas Shelby is headed for the $150,000 Fifth Season on Saturday at Oaklawn. It will be run at a mile, which is one of the reasons he was pointed to the race, said Diodoro.

The forecast for Saturday is a high of 42 degrees and a 71 percent chance of rain, according to The Weather Channel.