Edgeway begins path back to Breeders' Cup in Kalookan Queen 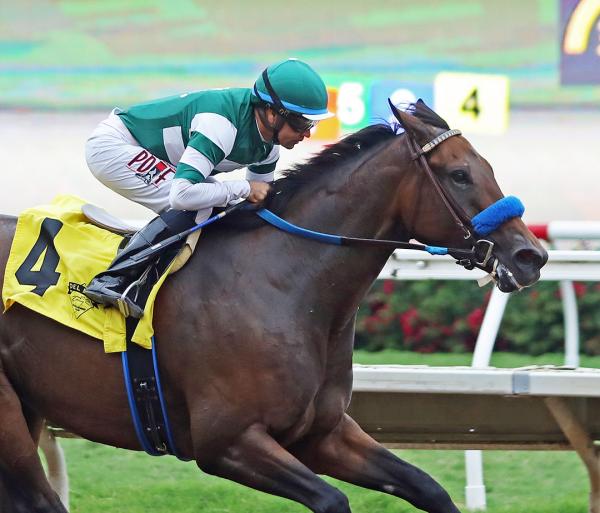 ARCADIA, Calif. – Edgeway ended her 2021 campaign with a career-best performance, running second in the Breeders’ Cup Filly and Mare Sprint at Del Mar on Nov. 6.

Edgeway was 16-1 in a field of five, finished ahead of 2-5 favorite Gamine, but could not hold off a late run from Ce Ce.

“It really was a nice race,” trainer John Sadler said. “We were rooting like hell.”

Next fall, Edgeway could very well start in the BC Filly and Mare Sprint at Keeneland. The first start of her 2022 campaign to reach that goal may be little more than a formality – Sunday’s $75,000 Kalookan Queen Stakes for fillies and mares at 6 1/2 furlongs at Santa Anita.

:: Get Daily Racing Form Past Performances – the exclusive home of Beyer Speed Figures

A two-time stakes winner in 2021, Edgeway drew the rail in a field of five and will be a strong favorite to win for the sixth time in her 10th start.

While the Breeders’ Cup is nearly a year away, Edgeway will start the new season as a lightly raced 5-year-old mare. She had only two starts last summer – a fourth behind runaway winner Gamine in the Grade 2 Great Lady M. Stakes at Los Alamitos in July and a win in the Grade 3 Rancho Bernardo Handicap at Del Mar in August.

“She had a little break going into the Breeders’ Cup,” Sadler said. “She came out of it in good shape. She’s always shown a lot of run. We’ve always loved her.

“She only disappointed us once at Los Al and maybe she didn’t like the track. We didn’t come up with a good excuse for the run. She wouldn’t have beaten the winner that day.”

Sadler trains Edgeway for Hronis Racing and hopes the Kalookan Queen Stakes will lead to an appearance in the Grade 2 Santa Monica Stakes, a $200,000 race at seven furlongs on Feb. 5. Starts in Grade 1 races, perhaps outside of California, are planned for Edgeway.

“The spots are there,” Sadler said.

Edgeway, who will be ridden for the first time by John Velazquez, is quick enough to lead, but equally as effective as a stalker. Edgeway drew the rail in the Kalookan Queen and races against stablemate Queengol as well as Stellar Sound, Merneith, and Stella Noir.

:: Join DRF Bets and play the races with a $250 First Deposit Bonus. Click to learn more.

Merneith, trained by Bob Baffert, has not raced since a win in the Grade 2 Santa Monica Stakes last February, her second stakes win. Typical of a Baffert-trained runner, Merneith has worked quickly in preparation for her return.

While Edgeway is a deserving favorite, Merneith is not to be dismissed because of the layoff. Baffert won the Grade 1 La Brea Stakes for 3-year-old sprint fillies on Dec. 26 with Kalypso, who had not raced since May.

Stellar Sound is winless in three starts since a victory in an allowance race at Del Mar in July. Trained by Michael McCarthy, Stellar Sound was third in the Rancho Bernardo and more recently a well-beaten fourth in the Grade 3 Bayakoa Stakes at 1 1/16 miles at Los Alamitos on Dec. 5.